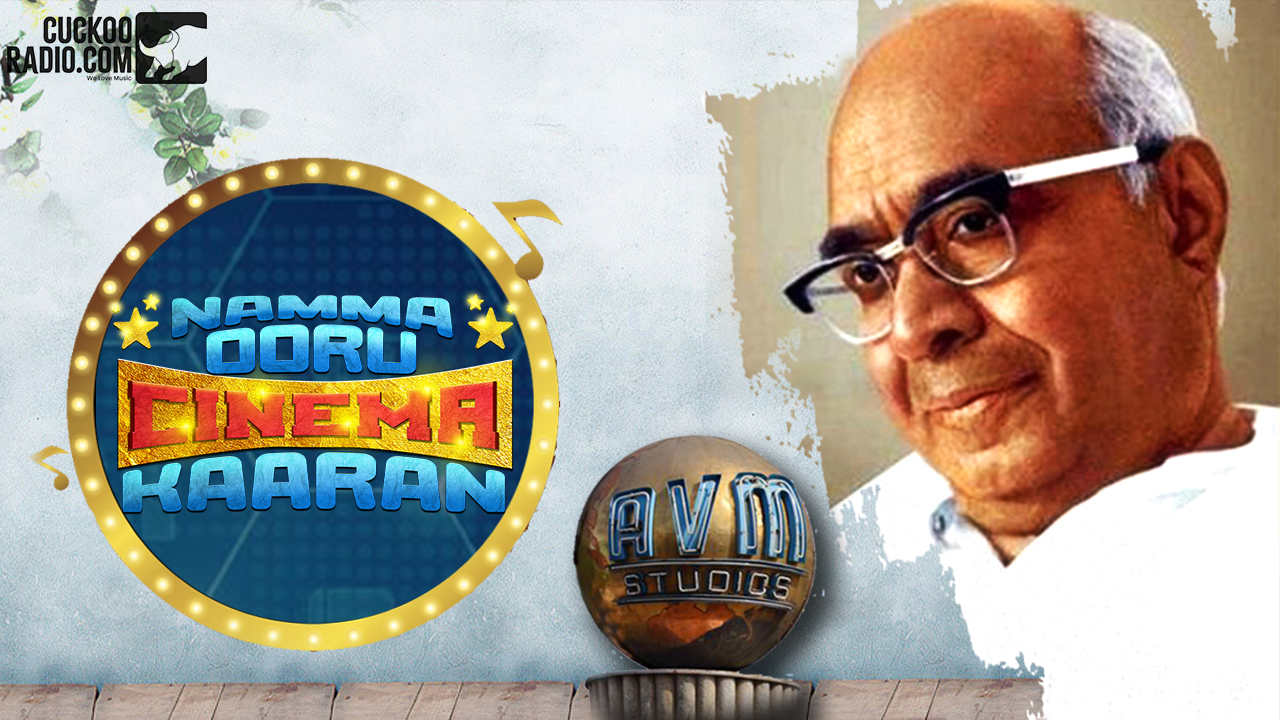 Avichi Meiyappa Chettiar also known as A. V. Meiyappan or AVM, was an Indian film producer, director and philanthropist who established AVM Productions in Vadapalani, Chennai. He is widely regarded as one of the pioneers of Tamil cinema, and one of three movie moguls of the South Indian film industry along with S. S. Vasan and L. V. Prasad. His production company AVM Productions is the only production company in Kollywood (Tamil film industry) to run successfully for five decades and three generations.

AVM was born in Karaikudi in a well-to-do Nagarathar family. He moved to Chennai (then known as Madras) at an early age and established Saraswathi Stores which sold gramophone records. Subsequently, he entered the film industry and started directing his own films. After some initial setbacks, AVM delivered a string of hits in the early 1940s. Following the immense success of his 1947 film Nam Iruvar, AVM moved to film production and established AVM Productions in Chennai, first at Santhome and then at Kodambakkam. In 1951, AVM entered the Hindi film industry with the film Bahar starring Vyjayanthimala. By the time he died in 1979, he had produced 167 films.

AVM was born in Karaikudi on 28 July 1907 to father Avichi Chettiar and mother Lakshmi Achi. Avichi Chettiar owned a department store called AV & Sons which sold gramophone records. AVM was born in the Nagarathar community whose members had gained a fine reputation in the mercantile and money-lending business in the later half of the 19th century and early years of the 20th century. At an early age, AVM envisioned better prospects in the trade of manufacturing records than simply selling them. Hence, he moved to Madras with his friends K.S. Narayan Iyengar and Subbaiah Chettiar and established a new firm called Saraswathi Stores on 9 September 1932. This new firm also manufactured gramophone records apart from selling them. In this new venture, he got excellent support from the manager K.P. Varadachari and his lawyer friend Thoothukudi Govindachari Raghavachari. Some of AVM’s early productions were dramas on mythological subjects like Ramayanam.

With the dawn of the talkies, AVM established the Saraswathi Sound Productions. In 1935, AVM made his debut as a producer with the Tamil film Alli Arjuna which performed miserably at the box-office. His next venture Ratnavali was another failure. He then teamed up with Jayanthilal, a cinema house owner and promoted a new company, Pragati Pictures Ltd.

In 1938, AVM bought the rights for the Tamil remake of a Marathi film on the boyhood of Lord Krishna. This film Nandakumar was an average grosser. AVM introduced a 14-year-old boy, T. R. Mahalingam, for the part of the young Lord Krishna. This young boy would later become an efficient singer turning in a number of melodious hits. Lalitha Venkataraman sang for the character Devaki making Nandakumar the first film to introduce the concept of playback singing in the Tamil film industry. Nandakumar was also one of the first Tamil movies to be shot on location as AVM leased the Club House off Mount Road in Chennai to shoot scenes without erecting sets.

AVM started his own studios in 1940 and named it Pragathi Studios. In the same year, AVM produced Bhookailas which became one of the most popular film versions of the Ramayana. The film was made in Telugu, its lead actors were from Kannada cinema and it was directed by Sundar Rao Nadkarni, a Mangalorean who had received his training in Bombay. AVM’s comedy flick Sabapathy(1941) starring T.R. Ramachandran, K. Sarangkapani and Kali N. Ratnam was a runaway hit as also Poli Panchali, another comedy. Sabapathy eventually emerged as one of the greatest comedy films of the era. He followed this with another hit En Manaivi.

In 1943, he produced the film Harischandra in Kannada based on the legend of a king who attempted to kill his own son to defend justice. The next year, the film was dubbed into Tamil making it the first Indian film to be dubbed from one language to another. During the making of Sri Valli in 1945, he employed singer Periyanayaki to sing for actress Rukmini. This was AVM’s second film to make use of playback. Pragati technicians worked round the clock to synchronise voice and lip. Reels were shipped back and forth in cars and trains between Madras and Karaikkudi to ensure good quality.

On 14 November 1945, riding on the phenomenal success of his first few films, AVM established his new production company, AVM Productions at Santhome, Chennai. He wanted to start his studio in Kodambakkam but was unable to, due to the acute power shortage during the Second World War. Left with no other choice, AVM established his studio at his hometown of Karaikudi. AVM’s first film under the banner of AVM Productions was Vedhala Ulagam.

In 1947, AVM produced the film Nam Iruvar based on S. V. Sahasranamam’s play of the same name. Reflecting the intense patriotic fervour and hope which engulfed the newborn nation, the film released in January 1947 after six months of shooting and was “a thundering success”. The story begins with a Subramania Bharati anniversary and ends with Gandhi’s 77th birthday celebrations. The success of Naam Iruvar was followed by the success of Vedhala Ulagam in 1948 and Vazhkai in 1949. Vazhkai saw the introduction of Vyjayanthimala who would later emerge as one of the top film stars of India. The film ran for 25 weeks and was released as Jeevitham (1949) in Telugu and Bahar in Hindi. With the success of Vazhkai, AVM Productions began to produce films in Tamil, Telugu, Kannada, Bengali and even Sinhalese. Following India’s independence, the power shortages had been met and AVM studios shifted to the sprawling location in Kodambakkam chosen by AVM, in the year 1948.

The Family Of AV. Meiyappa Chettiar is a large one. He has 5 sons and 6 daughters born to his 2 wives Mrs Alamelu Meiyappan and Mrs Rajeswari Meiyappan

With dawn of the 1970s, production had slowed down considerably. This was due to the fact that AVM himself was aging. Moreover, the AVM family chose to focus their attention upon social activities other than filming. AVM Productions produced not more than four films during the decade: Bomma Borusa, Dil Ka Raja,Akka Thamudu and Jaise Ko Taisa. Bomma Borusa made in Telugu by K. Balachander was an average grosser as was the Hindi film Dil Ka Raja which released in 1972. Akka Thamudu directed by the successful partnership of Krishnan-Panju was AVM’s last film in Telugu. It was also AVM’s only Telugu film featuring Jayalalithaa. In 1973, AVM produced his last film Jaise Ko Taisa starring Jitendra in the lead role.

AVM did not produce any movies following Jeene Ki Arzoo in 1981. He spent his time on social activities and the charitable institutions he had built as well as looking after his massive business empire.

AVM died on 12 August 1979 at the age of 72. In 1980, as per AVM’s last wishes, AVM Studios commenced film production under Meiyappan’s sons A.V.M Kumaran and M. Saravanan, after a seven-year hiatus.

During a career spanning four decades, AVM had produced 167 movies in all. He also directed most of his early movies. He is credited with having introduced Kollywood’s first playback singers, made India’s first dubbed film and Kollywood’s first film shot on location. He has also had the distinction of having had five chief ministers work in his films – C. N. Annadurai wrote the script for AVM’s Ore Iravu, M. Karunanidhi scripted the dialogues for Parasakthi, M. G. Ramachandran played the hero in Anbe Vaa, J. Jayalalithaa was the heroine in AVM’s Major Chandrakanth and Akka Thamudu and N. T. Rama Rao starred in AVM’s Jeevitham, Ramu and Bhookailas. During his four decades in the Indian film industry, he also introduced actors as T. R. Mahalingam, Vyjayanthimala, Sivaji Ganesan, Kamal Hassan and Major Sundarrajan who later became top stars in Kollywood. But his greatest achievement is undoubtedly his massive business empire which comprises a production company, a cinema, a movie studio and a string of educational institutions and charities.

Of AVM’s creations, AVM Productions is the most prominent. The production company is into its sixty-second year with three generations of the AVM family into the film production business. After AVM’s death, the company passed into the hands of his sons M. Balasubramanian and M. Saravanan. Under the able leadership of M. Saravanan, AVM Productions has continued producing hits as Punnami Naagu (launchpad for chiranjeevi as most notable actor), Murattu Kalai (which launched Rajnikanth into superstardom), Samsaram Adhu Minsaram (1989), Minsara Kanavu (1997), Gemini (2002), and Perazhagan (2004). In 2007 (which was also AVM’s birth centenary year), AVM Productions released Sivaji the Boss starring Rajnikanth and Shreya. Made at enormous cost of Rs. 60 to 960 million (15 to 20 million dollars), it is the costliest Tamil film made to date and had earned a critical reception worldwide. In recent times, AVM Productions has significant lessened film production making only one or two films a year. Instead, the production house is concentrating on making tele serials and documentaries Currently, Saravanan’s son M. S. Guhan and Balasubramanian’s son, B. Gurunath are also into show business forming the family’s third generation in the business.

In 1955, AVM won the president’s gold medal for the Hindi film Hum Panchi Ek Dal Ke. In 2006, the Government of India issued a stamp commemorating the achievements of AVM. On the 24th death anniversary of Avichi Meiyappa Chettiar, in 2003, AVM Productions released a VCD on the life of its founder. Starting with his early childhood in Karaikudi, the 2-hour long documentary told the story of AVM’s entry into the film industry and his rise to greatness.

On 30 July 2006, in commemoration of AVM’s centenary year, the Chief Minister of Tamil Nadu, M. Karunanidhi, unveiled a statue of A. V. Meiyappan at the campus of the South Indian Film Chamber of Commerce.