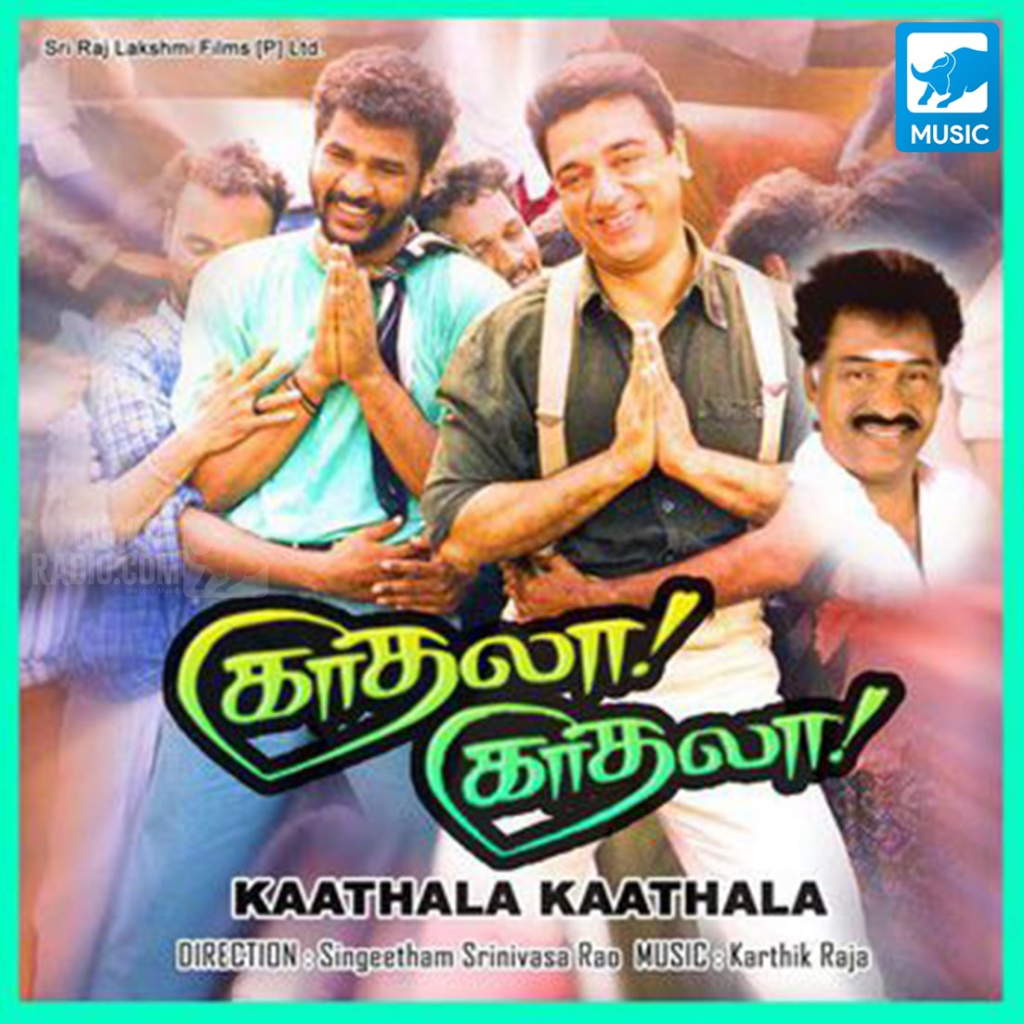 Kaathala Kaathala  is a 1998 Indian Tamil-language comedy film directed by Singeetam Srinivasa Rao and produced by P. L. Thenappan. The film stars Kamal Haasan, Prabhu Deva, Soundarya and Rambha in the lead roles with an ensemble cast in supporting roles. The film released on 10 April 1998, to positive reviews and became a commercial success. The film was later loosely remade in Hindi as Housefull.

Ramalingam and Sundaralingam are orphans who takes care of themselves and other orphaned children. Sundaralingam paints shop banners and calendars. Ramalingam is the man who finds way to make money, usually by means of fraud. He even acts as a handicap together with godman Ananda Vikadanantha and his partner. Sundari, an arts student falls for him. Her friend Janaki falls for Sundaralingam. Janaki’s father, Paramasivam, objects to Janaki’s wedding since Sundaralingam is poor, prompting Janaki and Sundaralingam to get married with the help of their friends.

Days go by but Paramasivam does not agree. This causes Sundari to ask Janaki to lie to Paramasivam that she gave birth to a son. Paramasivam upon receiving the letter, changes his mind and gets ready to set off to Chennai. Sundari had lied to her Chicago-based father, Balamurugan that Ramalingam is a rich man. Janaki, to easily convince her parents, lies that Sundaralingam became rich. The girls rent a big bungalow from a lady called Noorjahan, who mistakes Janaki and Sundaralingam as a couple. They rent the house for three days.

Sundari’s father was supposed to come on that day but misses his flight. Janaki’s parents want to surprise her and they end up coming on that day. Ramalingam mistakes Janaki’s father as Sundari’s father. Unable to tell the truth because of Noorjahan, Janaki and Ramalingam let it be. They also without any choice, make Sundari as the servant maid and Sundaralingam as the cook. Sundari borrows a child from a beggar women, who stays in the house in the name of a milk woman.

The four of them strive hard to hide the truth from Janaki’s parents. In between these, Varathachari, Paramasivam’s friend who knows the reality comes home. After avoiding anything wrong, they encounter Janaki’s maternal uncle, ‘Security’ Singaram. He is a very doubtful person who pressurize the youths, and starts suspecting them. Yet, he fails to convince his sister and brother-in-law.

When Balamurugan is on the way, Paramasivam steps in to help them, without knowing the truth at all. He concocts a more complicated story, where Ramalingam is his son, Janaki and Sundaralingam reprising their real relationship and worse, V. Anand to be his cousin. Anand is actually Ananda Vikadanantha who is absconding. When more of this happens, the elders smell something fishy and everything falls onto Ramalingam’s head. To put an end to all these, Sundari reveals the complete truth to everyone. Singaram tells all that Anand is the fraud and once again, Ramalingam has to prove his innocence.

A chase ensues when V. Anand is held hostage by his ex-partner Junior Vikadanantha for money which he looted. Inspector Chokkalingam arrives in time to find Ananda Vikadanantha and Junior and Ramalingam is proven innocent. Paramasivam accepts Janaki and Sundaralingam, and Balamurugan is happy about Ramalingam and Sundari.