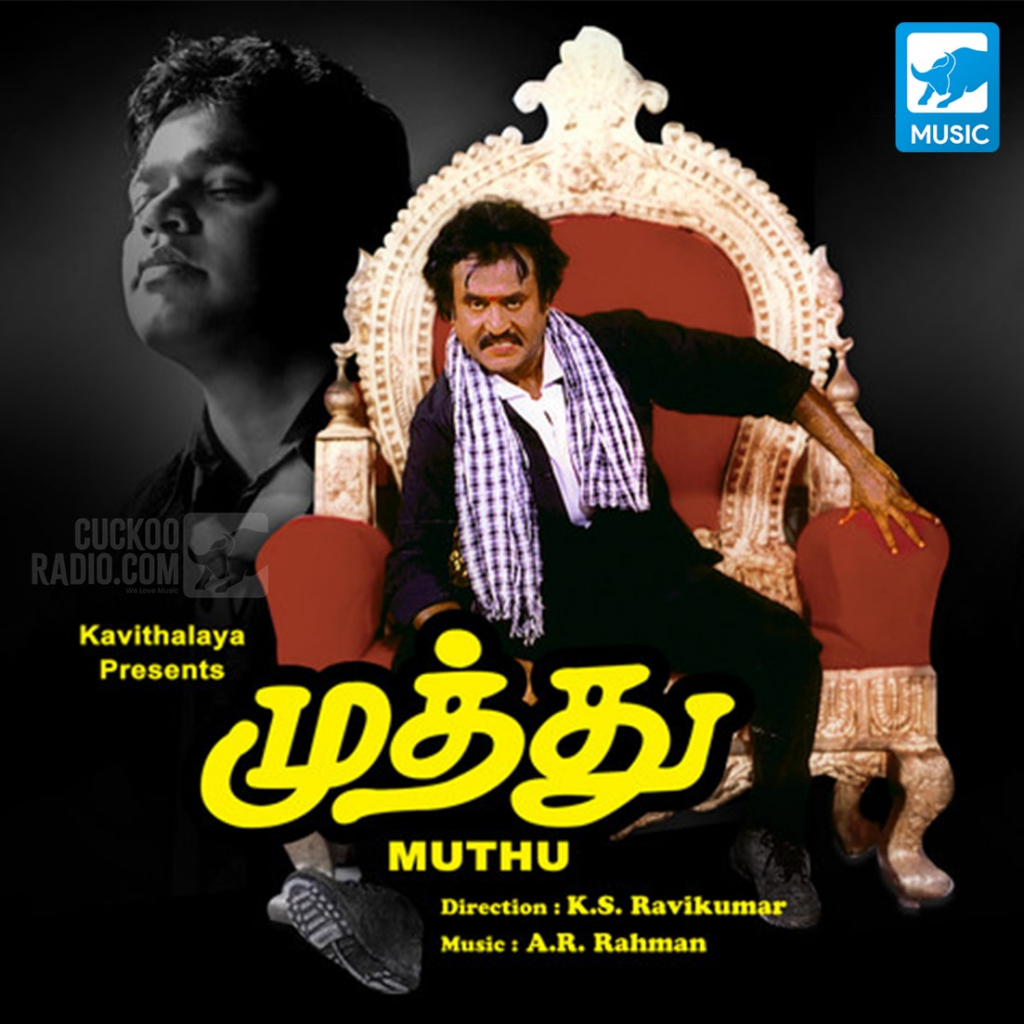 Muthu is a charioteer working for zamindar Raja Malayasimman. While watching a play, Raja falls in love with actress Ranganayaki when the garland she throws inadvertently falls on him. When Raja goes to another play of hers and sees her being harassed by a local village chief, he tells Muthu to rescue her. Muthu fights the village chief’s goons and rescues Ranganayaki. When more goons turn up, Raja advises Muthu to take Ranganayaki safely in their two-horse chariot while he manages the goons. Muthu assents and escapes with her, evading goons.

Ranganayaki dislikes Muthu’s company, but is forced to continue accompanying him. Both become tired and leave the horses to seek their own route, landing in Kerala. Muthu, not knowing Malayalam, gets into trouble for asking some people for a kiss as wrongly tutored by Ranganayaki. Finally, she comes to his rescue. After learning the meaning, Muthu surprises Ranganayaki by kissing her. They fall in love and return to Raja’s palace.

Ranganayaki, who is absconding from her abusive brother-in-law Pratap Rayudu who killed her sister and is now searching for her, requests to continue staying at the palace. Her associates also join. Raja’s uncle Ambalathar, keen to take control of Raja’s wealth plans to get his daughter Padmini married to Raja. Raja’s mother Sivakamiyammal keeps requesting her son to marry, referring to Padmini. But Raja, dreaming of marrying Ranganayaki, nods his head, and Sivakami sends word to her brother Ambalathar. When Ambalathar arrives and speaks of marriage, Raja reveals his intention to marry Ranganayaki. Shocked, Ambalathar brings Rayudu to the palace, who forcibly tries to take Ranganayaki until Muthu subdues and sends him away.

To remove Ranganayaki and Muthu from the palace and get his daughter married, Ambalathar instigates Raja, through his informer Kaali at the palace, by alleging that Muthu is romancing Ranganayaki and misinterprets the discussions between Muthu and Ranganayaki (who are at a distance) as Muthu compelling Ranganayaki to marry him. Believing Kaali’s words and what he had seen, an enraged Raja throws Muthu out of the palace after having him beaten up by Kaali. Sivakami, who had gone to a temple, returns and is shocked on learning what happened. She berates Raja, reveals that Ranganayaki only loves Muthu, and the truth about Muthu’s past.

Muthu’s father was the real zamindar of the estate. Since he was childless, he named his cousin Rajasekhar’s son Raja his successor. Soon after, his wife conceived and died while giving birth. At his brother-in-law Ambalathar’s instigation, Rajasekhar fraudulently obtained the zamindar‘s signature on blank papers and got all the property transferred to his name. Oblivious to this, the zamindar donated land to the villagers who returned to complain that the lands were not in his name. The zamindar realised that he was deceived, but instead of punishing Rajasekhar, handed over the entire property to him, and decided to leave the palace with his infant son. Sivakami pleaded that she be given the responsibility of raising the motherless child. The zamindar assented, and stipulated that his son be raised as a commoner. After the zamindar left, a remorseful Rajasekhar committed suicide and Sivakami moved to another town, the present one.

Sivakami says she lied that the zamindar‘s child died, and that the zamindar currently lives nearby as a nomad. Raja, realising his mistake, decides to go meet the zamindar and bring him back. Kaali, having overheard this conversation, reports to Ambalathar, who decides to murder Raja and frame Muthu so that he can take over the property. Kaali beats Raja, throws him into a waterfall and informs everyone that Muthu killed Raja. Muthu beats Kaali and makes him reveal that Ambalathar asked him to kill Raja. The villagers chase Ambalathar, until Raja arrives with his bride Padmini. Raja was rescued by the zamindar and decided to marry Padmini. Ambalathar, remorseful, thanks Raja for forgiving him. Raja tells Muthu of his true identity, and Muthu rushes to meet his father, who has already left the place. Muthu becomes the new zamindar, but prefers to see himself as a worker.