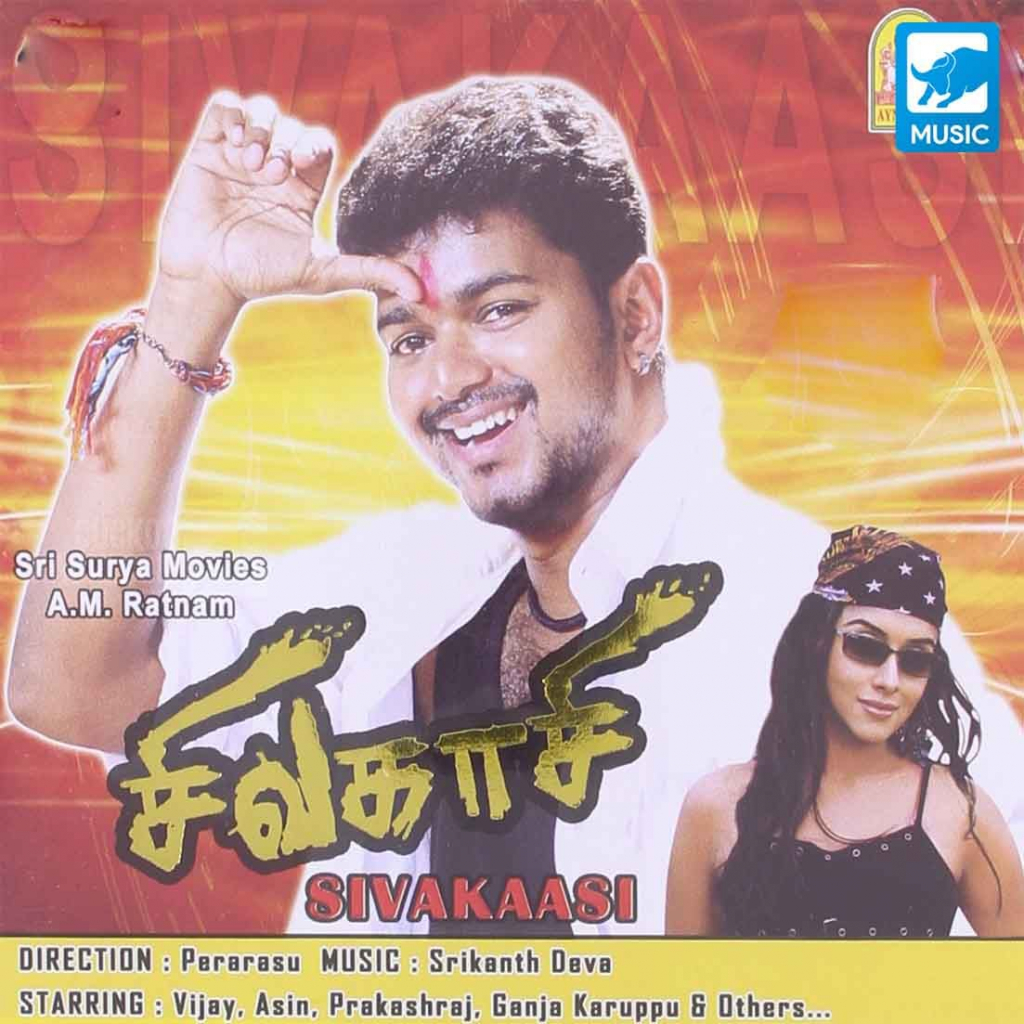 Sivakasi is a mechanic known for keeping rowdies in check. One day he chastises a jeweler’s daughter, Hema, for wearing “skimpy clothing.” After she instigates a false case against him, he humiliates her father by declaring his love for her at a wedding. In response, Hema claims he caused her sister’s suicide. , during which she declares her love. Doubting her, Sivakasi tells her to spend the night with him, but when she arrives at his house, her brothers take her back home. Fearing her death, Sivakasi recognizes his mistake and ensures her safety. Her father gives his blessing to the match.

Hema’s brothers visit and remark that his current income is not enough to support Hema, causing him to throw them out of the house. Hema confronts Sivakasi, remarking he couldn’t understand siblings as he was an orphan. Sivakasi reveals his real name, Muthappa, and that he was falsely blamed for setting off crackers near a possessed dancer 15 years earlier, a crime done by his brother Udhayappan. Hema berates him for ignoring his parents’ love and declares they will marry only with his family’s request.

Sivakasi returns to his native and discovers Udhayappan is now an MLA due to his mother-in-law Moolimungari’s influence. His mother works as a servant in her own house and is unable to recognize him. Her sister operates a roadside stall in a nearby village in utter penury with her husband and child. Sivakasi decides to improve their lot anonymously. One of his few confidants tells how his father died when Udhayappan claimed his mother had affairs. Enraged, Sivakasi beats Udhayappan and his men, claiming to be the husband of a woman he raped, and is paid 1 million rupees for her false suicide note. The next day, when Udhayappan tries to sell ancestral property, Sivakasi reminds the buyers of Muthappa and how, without his signature, the sale is illegal. To avoid this, Udhayappan dresses a false body to look like Muthappa, but Sivakasi inserts a note saying his share of the property should be donated. The note is found valid and Udhayappan reveals his deception.

Later Udhayappan registers his MLA candidacy but finds Vairam contesting, supported by Sivakasi’s money. The villagers see Sivakasi as an outsider, but he brings doubles of film stars to canvass for Vairam. Udhayappan brings the real Nayanthara, but Sivakasi makes her unintentionally support Vairam. Udhayappan, furious about Sivakasi, is visited by Hema and Sivakasi’s friends who are looking for him.

Udhayappan goes to Sivakasi’s house thinking he knows his identity. It is revealed that Hema lied that Muthappa and Sivakasi are friends. He threatens to kill their mother, and although Sivakasi burns his palms, he and Vairam decide to leave. At night, Vairam sees her husband getting kidnapped by someone who she thinks is Udhayappan, although it is Sivakasi in truth. When Vairam confronts her confused elder brother, he hits her, gaining her sympathy votes. Vijay fakes a threat by Udhayappan towards Vairam, resulting in Udhayappan’s men attacking villagers. The people turn against him and Moolimungari, who is covered in cow dung for making Udhyappan an MLA. She threatens Udhayappan if he fails to be re-elected.

Udhayappan plans to kill his wife and frame Sivakasi to gain votes, but Sivakasi saves her. Sivakasi secretly burns a body with Vairam’s husband’s chain, making everyone think Udhayappan killed him. The people riot outside his house. Sivakasi calls him, saying he can have Vairam’s husband back, but must hand over all ancestral property to her. Udhayappan signs it, thinking Muthappa can’t sign, and finds one of his men.