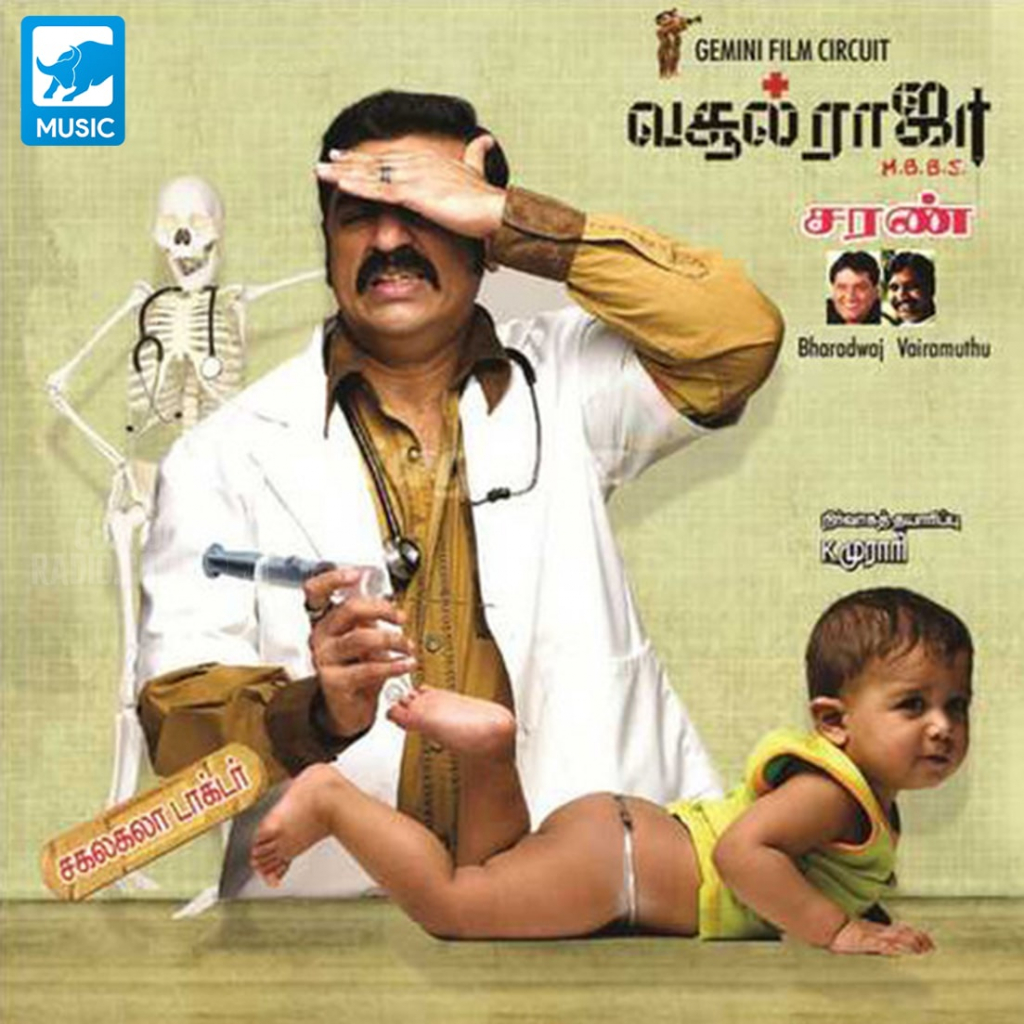 Vasool Raja MBBS (Collection King MBBS) is a 2004 Indian Tamil-language comedy drama film directed by Saran. The film is the Tamil remake of the Hindi film Munna Bhai M.B.B.S.. It stars Kamal Haasan, Prabhu, Sneha, and Prakash Raj, in the lead roles, while Nagesh, Rohini Hattangadi, Jayasurya,Malavika, Crazy Mohan and Karunas, among others, play supporting roles. The film’s music was composed by Bharadwaj.

Rajaraman, nicknamed “Vasool Raja”, is a local don in Chennai who makes a living by collecting money from people who refuse or dilly-dally in paying their debts to others, with the help of his right-hand man Vatti. Given that his father Sriman Venkataraman had wished him to be a doctor, he creates the faux Venkataraman Charitable Hospital. which is named after his father and pretends to live in accordance with this wish whenever his father and mother Kasturi visit him in Chennai.

One year later, Raja’s plan goes awry when Venkataraman meets an old acquaintance, Dr. Vishwanathan. The two men decide to get Raja married to Vishwanathan’s daughter Dr. Janaki aka “Paapu”, who was a childhood friend of Raja under that name. At this point, the truth about Raja is revealed. Vishwanathan insults Raja’s parents and calls them “fools” for being ignorant of Raja’s real life. Venkataraman and Kasturi, who are both aghast and heartbroken, leave Raja for their village.

Raja, in grief and despair, decides that the only way to redeem himself and gain revenge for the humiliation suffered by his father at the hands of the spiteful Vishwanathan is to become a doctor. He goes to a medical college to obtain an MBBS degree, the graduate medical degree in South Asia.

With the help of Vatti and others, Raja gains admission to the SLR Institute of Medical Sciences by threatening Dr. Margabandhu, who is a faculty member of the college, where he again encounters Vishwanathan, who is the college dean. His success there becomes dependent upon the coerced help of Margabandhu. While Raja’s skills as a medical doctor are minimal, he transforms those around him with the “Kattipudi Vaithiyam” (“hugging therapy”), a method of comfort taught to Raja by his mother, and the compassion he shows towards those in need. Despite the school’s emphasis on mechanical, Cartesian, impersonal, often bureaucratic relationships between doctors and patients, Raja constantly seeks to impose a more empathetic, almost holistic, regimen. To this end, he defies all convention by treating a brain-dead man as if the man were able to perceive and understand normally; intimidating Dr. Kalidas into admitting and treating a suicide patient named Neelakandan; interacting on familiar but autocratic terms with patients; humiliating school bullies; effusively thanking a hitherto-underappreciated cleaner; helping a terminally ill cancer patient named Zakir; and encouraging the patients themselves to make changes in their lives so that they do not need pharmaceuticals or surgery.

Vishwanathan, who perceives all this as symptoms of chaos, is unable to prevent it from expanding and gaining ground at his college. He becomes increasingly irritable, almost to the point of insanity. Repeatedly, this near-dementia is shown when he receives unwelcome tidings and begins laughing in a way that implies that he has gone mad. This behavior is explained early on as an attempt to practice laughter therapy, an attempt that seems to have backfired. Vishwanathan’s laughing serves more to convey his anger than diffuse it. Meanwhile, Janaki becomes increasingly fond of Raja, who, in his turn, becomes unreservedly infatuated with her. Some comedy appears here because Raja is unaware that Janaki and his childhood friend “Paapu” are one and the same; an ignorance that Janaki hilariously exploits. Vishwanathan tries several times to expel Raja, but is often thwarted by Raja’s wit or the affection with which the others at the college regard Raja, having gained superior self-esteem by his methods.

Eventually, Raja is shamed into leaving the college: His guilt for not being able to help Zakir gets the better of him. In the moments immediately following Raja’s departure, the bedridden man miraculously awakens from his vegetative state; at this point, Janaki gives a heartfelt speech wherein she criticizes her father for having banished Raja, saying that to do so is to banish hope, compassion, love, happiness, etc. from the college. Vishwanathan eventually realizes his folly.

Raja later marries Janaki, learning for the first time that she is “Paapu”, while also reconciling with his parents.